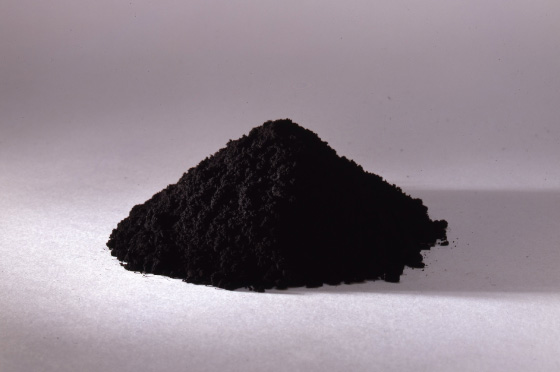 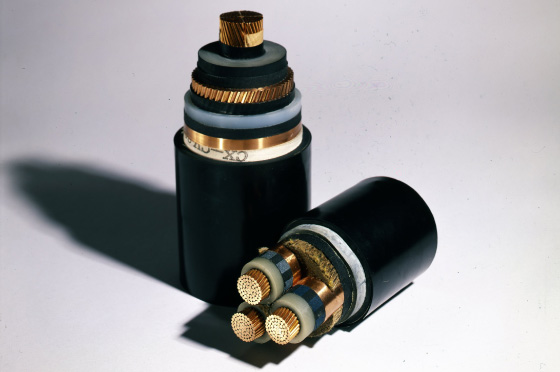 "DENKA BLACK" is acetylene black, a type of carbon black, obtained from thermal decomposition of acetylene. It is highly purified and extremely conductive; these characteristics make it an ideal material in the production of dry cells, electric power cables, as well as in such sectors as silicon products, IC packaging materials, etc.

Although "DENKA BLACK" is essentially the same as other carbon blacks in that it consists of colloidal fine particles of carbon, it is considerably different in that its particles are linked in the form of a chain, and that its graphitization is very advanced. It therefore offers unique characteristics such as conductivity (electrical and thermal) and liquid absorption, among others.

"DENKA BLACK" is produced through self-heating pyrolysis of acetylene gas, which requires no oxygen for reaction. Therefore, it is highly pure, the amount of hydrogen existing therein as undecomposed residual matter or as a functional group is extremely small, and functional groups containing oxygen are not found. This closely relates to the fact that "DENKA BLACK" has excellent conductivity.

Magnified through electron microscopy, "DENKA BLACK" appears in the shape of black balls linked together. This type of particle linkage is called the carbon black chain "Structure," and this "Structure" is highly developed in the case of "DENKA BLACK" compared with other carbon blacks. The apparent density of "DENKA BLACK" powder is low and this makes possible the retention of a large amount of liquid within this space. Also, besides particles being linked to one another, graphitization is well developed. This makes "DENKA BLACK" highly electrically and thermally conductive.

Since its production was started in 1942, "DENKA BLACK" has played an important role as a rubber reinforcing agent. From around 1948, acetylene black began to be used in dry batteries, and by 1950, acetylene black was widely used as an alternative to natural black graphite. Accordingly, the application of "DENKA BLACK" was also rapidly shifted from its use as a rubber reinforcing agent to use in dry batteries.
Recently, by taking advantage of its excellent high purity and electric/thermal conductivity, "DENKA BLACK", led by the granule product category, is being widely used for semiconducting layer materials for extra high-voltage cables, keyboards, rolls, belts and other conductive rubber, AV tapes, IC packing, and IC trays. In addition, application of "DENKA BLACK" has been newly developed for various primary and secondary batteries, and further applications in various areas are possible.

As for the reinforceability of "DENKA BLACK", it has such characteristics as (1) high hardness, (2) large heat generation properties, (3) high elasticity, and other average characteristics overall. Therefore, "DENKA BLACK" is used for printing rollers. In addition to reinforcement capability, "DENKA BLACK" has good heat dispersion and cut resistance, which is very suitable for tire bladders and racing tires exposed to severe use conditions and intense heat generation.

As for the reinforceability of "DENKA BLACK", it has such characteristics as (1) high hardness, (2) large heat generation properties, (3) high elasticity, and other average characteristics overall. Therefore, "DENKA BLACK" is used for printing rollers. In addition to reinforcement capability, "DENKA BLACK" has good heat dispersion and cut resistance, which is very suitable for tire bladders and racing tires exposed to severe use conditions and intense heat generation.

Because of the above properties, "DENKA BLACK" has been used for semiconducting layer materials for cables for a long period of time.

Conductive rubber is used on the semiconducting layer between a conductor and an insulator. Also, "DENKA BLACK" is very suitable for noise insulation material for communications cables, etc.

"DENKA BLACK" is used in belts used in plants and mines because belts are required to be electrically conductive in order to prevent electrostatic accidents.

ectric discharge and fire are prevented by eliminating potential differences caused by static electricity which is generated between a hose, fluid, and the ground when fluid flows through the hose.

Electrostatic sparks which don't cause problems in our daily life become a serious problem at explosives factories and at hospitals. Conductive shoes are effective measures for preventing such problems.

Rollers are electrically charged due to continuous contact/ separation of objects, which may cause explosions and a deterioration workability due to inhalation. Mixing "DENKA BLACK" into rubber rollers gives them conductivity, and makes it possible for them to be used copiers and printing machines.

When conductive rubber or conductive plastics are charged with electricity, they heat up like nichrome wires. Compared with metal, the heating of "DENKA BLACK" is even, light, and has the characteristics of rubber and plastics with excellent flexibility, which makes molding and processing easy. De-icers for propellers, heaters, and various other applications are being developed.

By giving conductivity to rubber and plastics with "DENKA BLACK" and charging them with electricity, the whole surface becomes a heating element. Such elements are used for floor heating and various road heating devices.

"DENKA BLACK" is used for the processing of various conductive materials, and for painting and adhesion of products which require electric and thermal conductivity.

Since "DENKA BLACK" uses acetylene gas as a raw material, it is a high purity carbon black, making it very good for electronic materials. As for the case of making silicon rubber conductive, "DENKA BLACK" shows good conductivity and fewer curing obstructions.

When "DENKA BLACK" is mixed into lubricating oil agents, their strength is increased, and their heat stability during high-temperature use greatly improves. "DENKA BLACK" is also usable in the metal industry for processes that require pure carbon, and as an agent for applying high-purity carbon in experiments and research. In the carbon industry, conductivity adjustments are possible by mixing "DENKA BLACK" into various carbon materials.

Therefore, DENKA BLACK has been used as a basic material for producing dry cell batteries, as well as for an additive in antistatic and electrically conductive rubber or plastic materials which are used in various industrial fields, such as electric wires and cables, tires, belts, hoses, heaters, paints, adhesives and many electronics parts.

"DENKA BLACK" is divided into three groups according to its form:
[Powder Products] [Press Products] and [Granule Products]

List of Physical Properties
(The figures for the physical properties of the products are not specifications but typical values.)